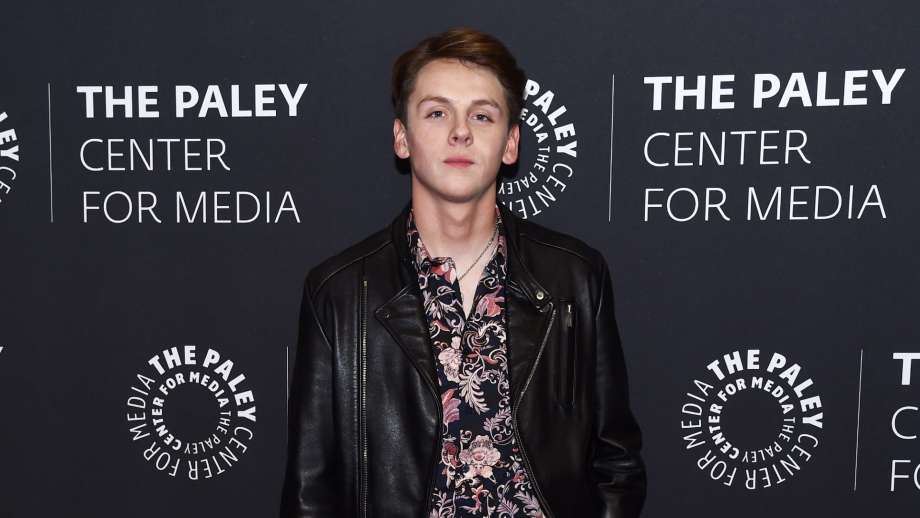 Hollywood is a place where various opportunities reside and where dreams are surely possible. This is particularly evident for the young actor Jacob Bertrand. He has been in the acting industry since he was at the age of 8. Jacob kicks off his skills and courage to adopt the ever-complex and competitive life of the showbiz world. Lucky for him, he successfully carved the title he wanted for himself in the entertainment field.

It is no doubt that his fans are interested in knowing who he is. How did he start his career at an early age? What are his preparations and secrets to reap success? Does he have a girlfriend? At this point, let’s find out more details regarding his body measurements and movies of this young and famous entertainer in the following sections.

The comedy-drama series Cobra Kai has been a platform for great artists. One of them is the young star, Jacob Bertrand, who portrayed the role of Eli.

In season 1, Eli from Cobra Kai embodies the quality of being timid and introverted. As a result, other students continuously made fun of him because of the scars on his cleft lip. Due to this, he always feels inferior to others, making him lose his self-confidence. Despite all the discouragements he received from various students at the campus, he still aspires to be part of the popular kids and be respected by all.

Apart from this, Eli wants to protect himself from too much bullying by joining Cobra Kai Dojo. After moments of intense training, he slowly surpassed his situation, leading him to acquire his new name, Hawk. 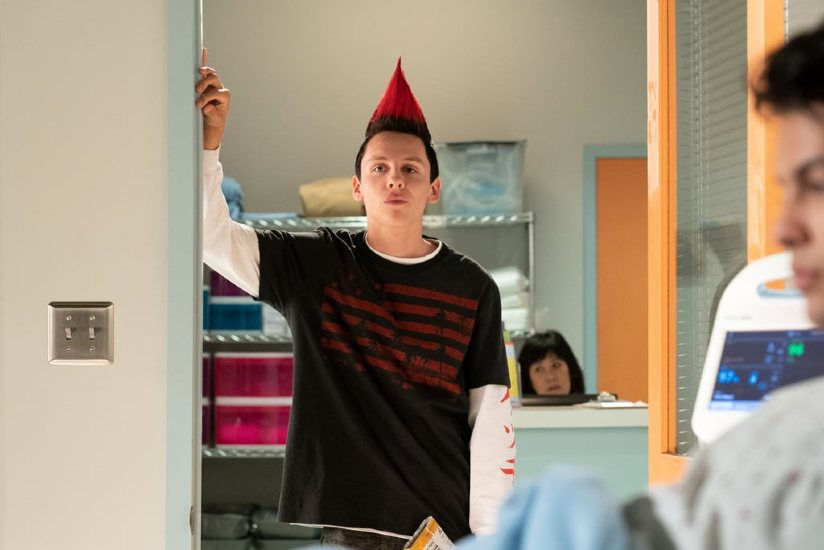 Jacob Bertrand plays the role of Eli on Cobra Kai.

Is Jacob Bertrand dating a Girlfriend? Or is he married to his wife?

Many sources have claimed that the young actor Jacob Bertrand is romantically linked to the famed actress and model Peyton List, who happened to be his co-star in the 2016 movie The Swap. They used to post their pictures together on their Instagram accounts and any other social media accounts. Most of their fans were pretty interested in their relationship, and thus, they were immensely supported by all.

Unfortunately, in the summer of 2017, their romantic connection ended up in a separation. 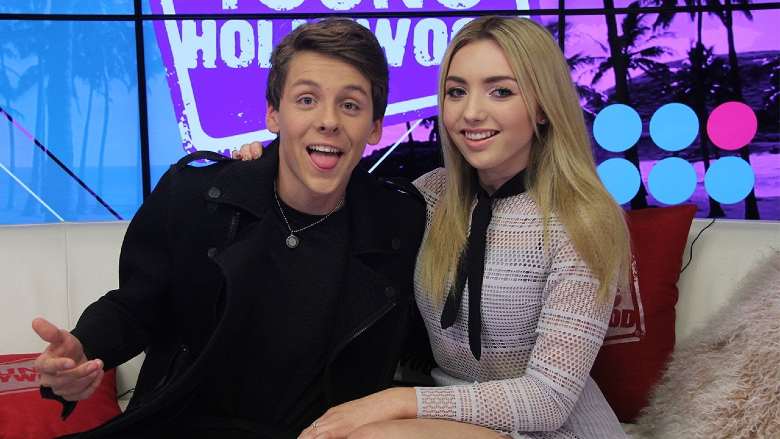 Despite Jacob’s unsuccessful love story, he did not stop from entertaining a new love interest. Currently, the actor is happy and stable in his current relationship for four years with Serena Pullen. The duo often found sharing their romantic photo on Jacob’s Instagram. 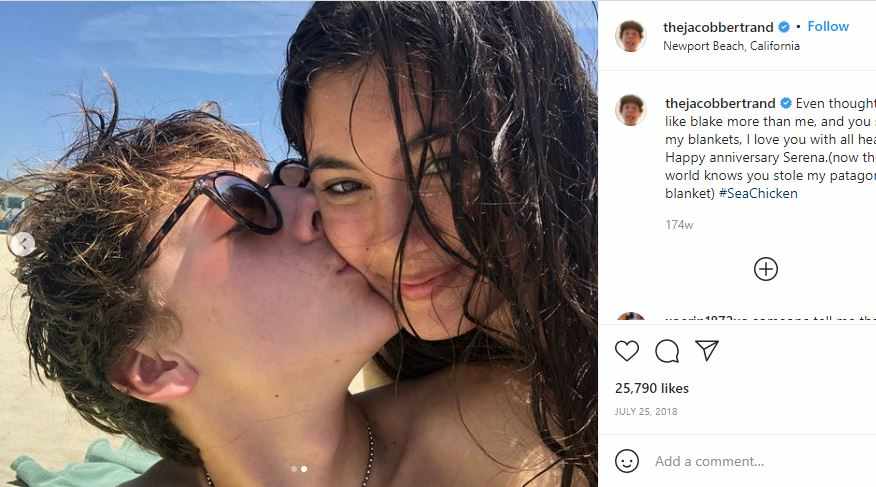 Height: How tall is Jacob Bertrand?

The famous American star successfully appeared in various TV shows, making his name rise to fame in public. He made his debut in 2010 in the comedy series Parenthood, where he portrayed the role of a boy in the episode of Wassup. Fortunately, the show made a huge success in the United States. It gained 15 awards and was luckily nominated for various acknowledgments, including a Golden Globe for Best Performance, Gold Derby Awards (2013) by Drama Supporting Actress, and a lot more.

And like any other shows he associated with, it also earned various awards and nominations like the 14 Primetime Emmy Award nominations, Golden Globe Award for Best Television Series, and Golden Globe Award win for Poehler’s performance. Some of his other roles include the 2011 Community, The Legend of Korra, and iCarly (2012). May it be he got lucky with the projects he joins in, or this young lad is the one who brings luck to the show. One way or another, it is excellent exposure for Bertrand.

Among these experiences, the young actor is most famously known for his fictional character Eli Moskowitz or Hawk in Cobra Kai. Having a cleft lip, he was inspired to appear in various shows to connect with all his fans and inspire them that imperfections are not a hindrance to moving forward in life. Jacob Bertrand became a fan-favorite because of his well-impressive skills in acting. One can say that the famed star truly ignited his way through the showbiz world.

Knowing all these, the famed actor is indeed impressive. He already got a slot in the entertainment industry at a young age and continuously carved his name in popularity. It’s not surprising anymore that he gained a bag of wealth and a handsome worth of money. According to a credible source, Jacob has an estimated net worth of $1 million as of 2021. True enough, success knows no age and boundaries.

Moving on to his personal life, the 21-year-old Jacob Bertrand was brought into this world on March 06, 2000.

He was well-cared and supported by his beloved parents Christina Bertrand, a nurse at a local hospital, and Scott Bertrand, an accountant.

Growing up, Jacob used to be with his younger brother Blake and older sister Makenna. He loves to spend time hanging out with his brother in his leisure days. Given this, it can be said that he always put his loved ones upfront throughout his existence. Apart from his commendable acting skills, the young actor is exceptionally talented. He loves to sing, play guitar, and do sports like basketball and soccer. 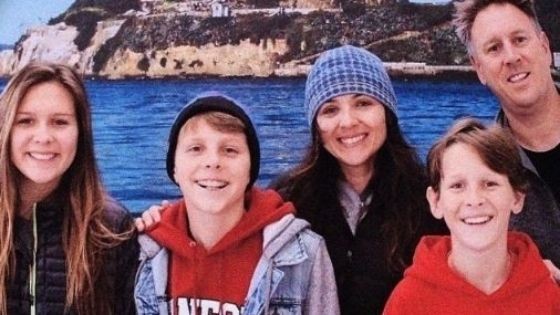 Jacob Bertrand with his parents and siblings

When it came to his professional life, Jacob started his career in acting at five years old when his parents wanted him to join acting classes at a local theatre. After years of training, he finally acquainted himself with performing various roles and won different awards. He featured himself across multiple TV shows, movies, and commercials. Aside from this, the renowned star succeeded in his guest appearance on the shows Park Recreation and NBC comedies Community.

His meteoric rise to stardom truly made him known in the Hollywood world. Jacob did not only receive a vast fortune from his career, but he also gained so many supporters across the globe. Indeed, his story as a successful child actor is a great inspiration to all people who dream of raising their name in the showbiz industry.